A transformer with turns ratio a interconnecting two nodes i, k can be represented by an ideal transformer in series with the nominal transformer leakage admittance as shown in Fig. 2.2 (a). If the transformer is on nominal tap (a=1), the nodal equations for the network branch in the per unit system are 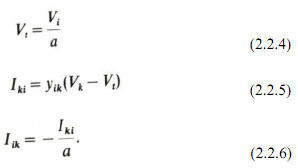 A simple equivalent - circuit can be deduced from equations (2.2.7) and (2.2.8) the elements of which can be incorporated into the admittance matrix. This circuit is illustrated in Fig. 2.2(b). The equivalent circuit of Fig 2.2(b) has to be used with care in banks containing delta-connected windings. In a star-delta bank of single-phase transformer units, for example, with nominal turns ratio, a value of 1.0 per unit voltage on each leg of the star winding produces under balanced conditions 1.732 per unit voltage on each leg of the delta winding (rated line to neutral voltage as base). The structure of the bank requires in the per unit representation an effective tapping at √3 nominal turns ratio on the delta side, i.e. a= 1.732. 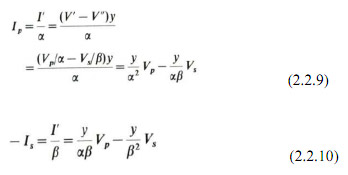 or in matrix form

These admittance parameters form the primitive network for the coupling between a primary and secondary coil.

To cope with phase shifting, the transformer of Fig. 2.3 has to be provided with a complex turns ratio. Moreover, the invariance of the product VI* across the ideal transformer requires a distinction to be made between the turns ratios for current and voltage, i.e. 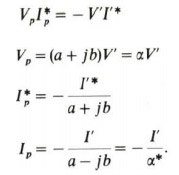 Thus, the general single-phase admittance of a transformer including phase shifting is

Note that, although an equivalent lattice network similar to that in Fig. 2.3 could be constructed, it is no longer a bilinear network as can be seen from the asymmetry of y in equation (2.2.14). The equivalent circuit of a single-phase phase-shifting transformer is thus of limited value and the transformer is best represented analytically be its admittance matrix.